This function honored expatriate Indian entrepreneurs who had contributed to the economic development of the Arab World. He was honoured by H.E. T.P Seetharaman, Ambassador of India to the U.A.E and the Legendary Bollywood star Sharukh Khan. Sun Group was much praised for its achievements in diverse industrialization, job creation and social services.

He was honored by H.E. Dr. Shashi Tharoor, Minister of State for Human Resource Development, Government of India. 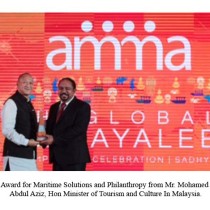 He was selected as one of the 100 most powerful Indians in the Gulf in 2012 and the award was honoredby H.E Sanjay Verma, the Indian Council General.